In this article, you will learn What is Flat Belt Drive? Its types, advantages and disadvantages in details.

What is Flat Belt Drive?

This belt drive uses only flat belts and is passed over the driver and driven pulleys. The open and cross belt drives are only possible with flat belts.

The motion or power is transmitted from one shaft to another shaft by means of belts, i.e., these belts are used when the two shafts are apart at some distance.

It consists of driver or driving pulley, driven or follower pulley, and the endless belt is passed over to these pulleys. The ##Fig. 1.17 shows the belt drive with a flat belt. 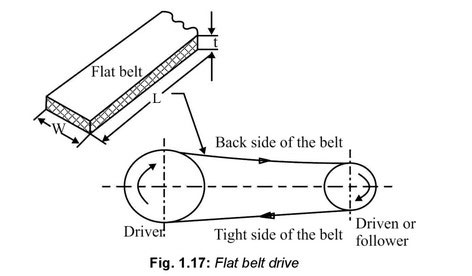 Belt drives produce the least amount of noise and vibration.

This portion is always under compression.

The lower portion of the belt under tension is called as the tight side of the belt. There is a friction between the belt and pulley which provides the grip and enables the power to transmit between two pulleys.

In a belt-drive, the power transmission depends on the amount of friction between pulley and belt. The slip can be eliminated by running the belt with a slower speed.

The pulley used for belt drive is slightly crowned to avoid the belt from running out of it. Then the belt can be run with higher speed.

The crowning of the pulley holds the belt centrally. The effective pulling power of the belt causes the rotation of the driven pulley, and it is the difference between the tensions on tight and slack sides.

The materials used for the pulley are cast iron, steel, and steel alloys. For low speeds and light work applications, usually, wood is recommended.

The drive is obtained by using either flat belts or V- belts.

Flat belt drives are suitable to transmit power from one place to another place when the distance between the two places or pulleys or shafts is larger, and V — belts are for short distance.

The ends of the belts are joined by using rivets, nuts, and bolts or joined by lacing or cementing methods. Wires are also used to join the belt ends since this method is easier and joined quickly.

The rim of a pulley is slightly rounded or given with a camber on the surface like as shown in ##Fig. 1.18 below. This rounded pulley or camber is called crowning.

This crowning of pulley mainly eliminates the belt slip when the pulley rotates because the belt has a tendency to move to the farthest distance from the pulley axis due to centrifugal force, and this is possible only if the belt is in the middle of the pulley.

The material used for the belt must be strong enough, flexible, and durable and have a high coefficient of friction and withstand high tension.

Belts used for power transmission consist of any one of the following material as listed below.

The balata belts are manufactured by using balata, which is obtained from the tree.

The fabric belts are made from canvas or cotton impregnated with rubber and are suitable for warm climates.

If the belt is made up of cotton, they are called as canvas belts. Canvas belts are cheaper, resistant to moisture, and can operate at high speeds.

These belts can be produced with a suitable width, thickness, and length, and these can be used in warm climates.

The rubber belts cannot be used in the presence of oils and greases, and they cannot tolerate high temperature. In rubber belts, the fabric is used to manufacture them, and then they are coated with rubber materials.

Usually, the common material used for the belt is leather, because they can tolerate medium temperature and are less costly.

But leather belts are not suitable for high-temperature applications because the shape and size of the belt may change due to high temperature.

But the leather belts have a high coefficient of friction and high power transmitting capacity.

The belt ends may be joined by riveting, lacing or cementing method.

During the joining of belt ends, the two ends of the belt are first lapped and riveted with suitable rivets or the belt ends are butted, and the lace is threaded.

However, due to improved methods available, the leather and balata belts are produced by cementing method. This will give the highest strength to the belt joint.

2. This belt drive gives better performance at high speeds and is more economical to use.

3. This can withstand high load and have a long life.

5. This belt drive is suitable for long-distance.

6. They are very economical when shafts are separated by large distances.

1. Slip and creep will be higher, and both will result in loss of power and efficiency of belt drive.

2. Large power transmission is not possible.

3. To maintain the correct velocity ratio is difficult.

4. This belt drive is not suitable for short-distance and occupies large space.

5. Belt length increases due to tension and compression at the tight and slack side of the belt.

6. After long service, the belt may fail to function well.

7. The angular-velocity ratio is not constant.

8. They generate heat due to the operation of belt drive for a long duration.

Thanks! for visiting us. That’s all for the Flat Belt Drive.

Please, don’t forget to share this article. Sharing is Caring :)-

Read Also: What is Bearing?15 Types of Bearing [A Comprehensive Guide]