It has been observed that the power generation of an automobile engine depends on fuel consumption, and fuel consumption can only be increased by feeding more air to the engine cylinder.

This means that air consumption by an engine is directly related to the engine power.

The air supplied to the engine depends on the swept volume of the engine. Therefore, more air has to be pumped into the cylinder to get more power.

The process which forces more charge into the cylinders than can be drawn in by natural piston action is known as supercharging.

The power of an engine falls off with an increase in altitude the decrease being due to the reduction in the density of air.

At an altitude of 5500 meters, an engine draws in only about half as much charge per cycle as that at sea level, and the engine then develops less than half as much power.

By supercharging an engine at high altitude, it is possible to keep the power constant as that at sea level.

A supercharger increases the pressure of the air-fuel mixture received from the carburetor before it enters the engine.

Thus a supercharger forces the mixture into the cylinder at a pressure higher than that of the atmosphere. The higher weight of charge develops more power.

The purpose of supercharging can be stated as:

1. To reduce the weight per horsepower of the engine.

2. To minimize the space occupied by the engine.

3. To maintain the power of the engine even at high altitudes.

4. To improve power in a racing car.

5. To improve combustion efficiency due to the formation of a homogeneous mixture.

The following effects are observed in supercharged engines:

1. A supercharger produces better mixing of the air-fuel mixture. The turbulent flow helps in additional blend of the fuel and air particles.

2. The temperature of the charge is raised as the charge is compressed in the supercharger. This is beneficial so far as the vaporization of fuel is concerned.

However, the higher temperature tends to lessen the density of the charge. Also, the chances for detonation are highly increased.

In a diesel engine, knock is suppressed due to the rise in temperature of the charge (air).

Read Also: What is Bearing? 15 Types of Bearing [A Comprehensive Guide]

A supercharger is a device which increases the induction pressure of an engine and is connected between the carburetor and the induction manifold.

There are three types of superchargers:

The above three types of superchargers are explained in details below.

A centrifugal-type supercharger is relatively light and compact and produces a continuous flow of air under pressure.

The mixture of fuel and air enters the rotating impeller in a direction parallel to the shaft.

The impeller (rotor) rotates in a close-fitting casing at the speed of 10,000 to 15,000 rpm. Thus, the impeller imparts high velocity to the mixture due to centrifugal action.

The centrifugal supercharger is cheap and straightforward. It has good efficiency in the range of pressure ratio of 1.5 to 3.0. The pressure ratio varies with the square of the speed.

In the high-efficiency range of operation, the pressure ratio remains constant, but the volume flow changes. This makes the centrifugal supercharger unattractive for use in automobile engines because automobile engines are variable speed engines.

The limited speed range of the centrifugal supercharger makes it suitable for constant speed type engines such as aircraft engines and water pump engines.

When the inlet valve of the engine closes, and the outlet airflow is restricted, the pressure ratio of the supercharger increases in an attempt to counteract the restriction.

The opposing characteristic to changes in the flow of air changes the performance of the supercharger and surges occur. At this stage, the pressure ratio falls and does not oppose the restriction to flow.

In the supercharged gasoline engine, the supply of mixture is controlled by a throttle.

When the throttle is closed far enough to reduce the inlet-manifold pressure below the atmospheric pressure, the surge may occur in the centrifugal supercharger. This reduces the efficiency of the compressor.

The impeller of these types of superchargers are run at speed ranging from 10,000 to 30,000 rpm. And at such tremendous speed, the centrifugal and inertia forces on the impeller are very great.

Therefore, the materials whose tensile strength and weight ratio are the highest are suitable for impellers. Hence, the impellers are made either of alloy steel, duralumin, or magnesium.

The housing is generally made of cast aluminum.

The roots type supercharger consists of two rotors with two, three, or more lobes on each rotor.

The shafts are connected by gearing and rotate at the same speed. The rotors are made of such dimensions that they rotate in the housing with a slight clearance, and also have a clearance between them. 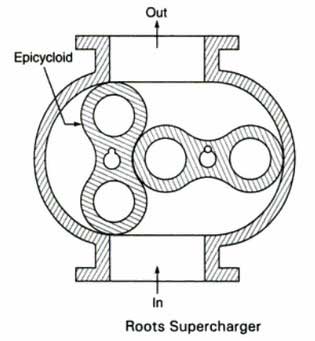 Air enters the space between the rotor lobes at the inlet and is carried around the rotors to the discharge port. There is no compression in this process.

Compression of air takes place only when the discharge port is opened, and the air is pushed. The movement of the impeller (lobes) causes only displacement and not compression.

Therefore, the force on the impeller is constant during the inlet and discharge processes. An ideal roots supercharger has no leakage.

However, in practice, the volume inducted into the displacement is less than that theoretically calculated because of leakage between the lobes and the housing of the supercharger.

These types of superchargers are suitable for the pressure ratio from 1.1 to 2.0.

The roots supercharger is simple, cheap, and has good mechanical efficiency and does not require lubrication.

The volumetric efficiency decreases rapidly with an increase in pressure ratio.

The rate of delivery of air varies faster than the speed because the leakage decreases as the speed increases.

The power absorbed by the roots supercharger increases in a greater proportion due to the turbulence caused by the right angle flow path.

When the roots blower is used in a two-stroke engine, then it is called a scavenging blower.

The leakage of air is approximately proportional to the square root of the pressure difference and independent of the speed.

It is also known as the centric vane-type supercharger. It consists of an eccentric drum on which a number of vanes are mounted in such a manner that they can slide in the slots provided for them.

Each slot carries one vane.

The vanes are pushed out by the springs which are at the inner side of the vane. The outer edge of the vanes remains in contact with the inner surface of the supercharger body.

The drum is rotated by the power shaft. The vanes are carried around. Since the vanes are free for radial movement, the outer edges of the vanes remain in contact with the inner surface of the body.

Thus, a surface seal is obtained at the outer edge of the vanes, as well as, where they pass through the revolving drum.

In practice, actual contact is avoided by providing a very slight clearance. This prevents friction between the outer edge of the vanes and the inner surface of the body.

The radial movements of the vanes are accurately controlled by their carriers. The space between the body and the drum goes on decreasing from the inlet to the outlet side.

When the blades move out, the air is induced between the space. Air is discharged when these spaces decrease near the exhaust side of the supercharger.

Thus, the air-fuel mixture (or air) entrapped between any two vanes goes on decreasing in volume and increasing in pressure as it reaches the outlet.

Thus, the flow at the outlet is pulsating and noisy. The speed of this supercharger is limited because of the radial motion of the vanes.

That’s all for the supercharging and types of superchargers. I hope you like it. Please, don’t forget to share it.

3. What is Flat Belt Drive? | Its Advantages and Disadvantages.